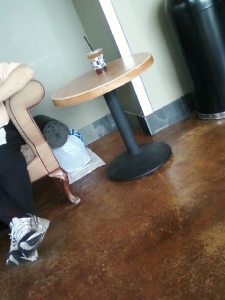 I didn’t go to church today.
.
I met Michael today for the 2nd time.  It is interesting that I am beginning to recognize individuals in a homeless community.  It is also interesting that I use to refer to them as bums.  You can find references to bums in previous God Spot posts.  I now think of them in terms of individuals in a homeless community.
.
Michael is impeccably dressed in clean clothes.  He is concerned about a bit of parfay dripping on his pants.  Michael is a lot like you and I.  The difference is, Michael is homeless.  He carries a bedroll and has no place to go, but is always on the go.  The last time I met Michael, he said the police were looking for him.  I don’t know if that is the case or not.  It may just be in his mind and part of the reason for the life he has chosen.
.
I chatted with Michael and told him about God Spots.  I said it likely, he would be in the book.  I asked if there was anything I could do to make life better for him.  He said, he didn’t know what that might be.  I said I’d like to give him hope.  He teared up, but quickly brushed it aside.  I asked if I could pray.  He hesitated then said, “OK” but….. I don’t know what else he was thinking.  He just shrugged.
.
We chatted about God intervening in our lives.  I shared John 3:16.  He knew the verse well and said he believed in it.  I asked if he ever tried to live homeless but connected to a church fellowship.   He said it didn’t work because of the religious dogma.  He preferred interfacing with God on his terms as opposed to someone else’s.  I said he was obviously a smart man.
I shared with him that he was a special class of citizen in God’s kingdom.  He was homeless and God made special provisions for homeless, widows and orphans.  I think the best gift I could give Michael was hope in the fact that God counted him special.
.
Without any suggestion by me, a young lady from It’s a Grind coffee shop, gave him a parfay and ice tea.  I was blessed with their generosity.  Another gentleman from India, came over and asked if he could help.  Help was declined.  As he got up to leave, I gave him some money, wished him well and blessed him.   I said I looked forward to our paths crossing again.  He agreed.
.
As you live life today, pray for God’s grace on Michael.  He says he has been homeless for two decades.  I asked if he heard about the new homeless shelter San Antonio has built.  He said shelters were not for him….
.
Michael is a special class of citizen in God’s Kingdom…

It is the desire of my heart that God be Lord of my life. Life’s experiences have killed the old man and God is building a new creation in me. I look forward to experiencing the new man God creates in the old vessel known as Archie via "God Spots". View all posts by 37stories

2 thoughts on “Homeless, hopeless and forgotten”