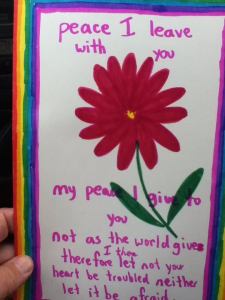 What if God gave you a set of water colors, dropped you on earth and said, “Make the most of it?”

You may remember this post from October of last year…

It centers around a homeless man or at least I assume he is homeless and that he is a man.  Are angels homeless?  I don’t know….

Anyway, I woke up this morning wondering how I might see Jesus at work today.  I anticipated God would work and allow me to participate.  I went about my scheduled activities, pretty predicable.  I even had a Groupon coupon i planned on using by taking my friend Skip out to brunch.

We drove on over to IHOP and ordered our brunch.  He had the nofrills french toast and i had a hamburger and fries.  Everything was normal, until Skip pointed out the homeless man to my back.  He said the guy was trying to pour coffee from an empty carafe.  I was amused until it hit me… God Spot!

The waiter came by and i said to feed the guy in the corner and put his charges on my ticket.  The waiter said something like, “That wouldn’t be needed.  He would be leaving soon.”  Annoyed, i got up and took my hamburger and fries over to the homeless guy in the corner and offered them to him.  i recognized this guy as the one i had previously given my Starbucks card too.  i don’t know if he recognized me, but he offered a water color painting of a flower to me in exchange. i eagerly accepted it and went back to my table.  Skip ordered me a replacement meal and we were both in awe of the beauty of God’s handiwork in engineering circumstance.

After posting the God Spot on Facebook, i got a response from one of my friends sharing how he and his Bible study group 5 years earlier had an unexpected visitor that in part said, “He pulled up a chair and introduced himself as Tony. He reached into his backpack and pulled out, not a gun with which to murder all with, but a set of scented markers and a stack of napkins. He began to draw floral pictures and writes Psalms on the napkins for each of the ladies in the class. He also knew more about Philippians than anyone in the room, and despite his speech impediment, was able to contribute valuable input to our study of Philippians.”

It seems the guy has a name, Tony and 5 years earlier was painting the same flower.  Which brings me to the question, ” What is God gave you a set of water colors, dropped you on earth and said, “Make the most of it.””  Just think of the incredible adventure you would have, knowing God had given all you would need to enjoy life to the fullest…

I am serious about the question and wonder how much of life i have missed by chasing the American dream.  Possibly, there is a fuller life living it new testament style with little in the backpack, except water colors.  Think about it.

It is the desire of my heart that God be Lord of my life. Life’s experiences have killed the old man and God is building a new creation in me. I look forward to experiencing the new man God creates in the old vessel known as Archie via "God Spots". View all posts by 37stories

One thought on “What if God gave you a set of water colors, dropped you on earth and said, “Make the most of it.””