A shadow that heals.  Why can’t we do that?

Act 5:12 ¶ And by the hands of the apostles were many signs and wonders wrought among the people; (and they were all with one accord in Solomon’s porch.

Act 5:15 ….. they brought forth the sick into the streets, and laid [them] on beds and couches, that at the least the shadow of Peter passing by might overshadow some of them.

Act 5:16 There came also a multitude [out] of the cities round about unto Jerusalem, bringing sick folks, and them which were vexed with unclean spirits: and they were healed every one.

While most of us believers feel that we are giving God our best, there is something still missing.

We are satisfied with being less than we should be.

This powerlessness can come from:

1. faking the power, so that true power is blocked

Many think demonstrating the “power of God” consists of yelling very loudly during sermons, or acting aggressively while “on stage.”

Others fake prophecies, claiming they are hearing from God, when they are either

b.     repeating gossip, or something you have already told them, or

d.     “reading” you while you sit there, using psychology techniques.

Such displays of false authority only cripple the body of Christ.  These are displays of egotism.

We need to recall the ministry of Jesus, that he went around quietly, and just with a word, people were healed and delivered from unclean spirits.

Many are afraid of the power of God, and do not want anything to do with a supernatural experience.

Many are satisfied with what they have, and not interested in putting in the necessary time with God to be a proper channel.

Some are very sincere and faithful, yet they do not know what is available to them.  They would use the power properly to help others.

–
So, how do we come to minister as Peter did?

I wish there was a way for Peter to come back and talk to us.
Since I do not consider myself on the same level as Peter, and cannot speak for him, I can only offer observations from the Word.

1.  Peter had received a lifetime of learning the Word before he ever met Jesus.

2.     Peter was with Jesus constantly during his ministry, and witnessed how Jesus did everything.

4.     When he denied Jesus 3 times, his ego and world were completely shattered.  He was no longer confident in his own spirituality.

5.     He asked for forgiveness when he committed the worst sin of his life.

6.     He was the one apostle who was willing to step out of the boat on a stormy sea to walk on water, to reach the Jesus he loved.

7.     He preached the gospel, knowing that he would eventually die because of it.

How many of us can say that this describes us?

Many newly saved try to go into leadership and ministry after being saved.  This is inappropriate.  They need to learn the Word first.  There is discipline and preparation involved.

How many of us spend all, or most, of their time with the Lord?   How many pray daily?   How many actually pay attention to God’s actions in the world.  Do they recognize them, or think the event is explained by natural means?

Do we cling to our old life, habits, and priorities, while trying to have a relationship with God?

How many of us have been crushed spiritually and emotionally beyond repair?  How many of us have had to realize how totally deficient and weak we are, no matter how much we have learned or have done for God?  Are we still too impressed with how smart or righteous we are?

Are we humble enough to admit that in our moment of feeling the most righteous, that we have still failed God, and betrayed him with our lives?  We still have our fleshly bodies and nature, and we still fail God daily.

Can we ask for forgiveness daily, as there are always things we do wrong?

Are we willing to do the impossible, risk our lives, and give God all the glory, while we fade away in the shadows?

Are we ready to die?  Or is life still too precious to us, that we protect ourselves by inaction, and avoiding what we must do for the Lord?

I have read Acts many times.

But this last time around, when I read about Peter’s shadow, all I could think was

It really humbled me to read about Peter.

It made me look into the mirror, and see myself as deficient.

There is so much more we could all do for the Lord, if we would just do what Peter did.

While I am a product of the grace of God, someday I will be judged for my works.

And right now, I have not done enough.

I must do more, and be more.

I must be what God had planned for me.

Pray for me, and I will pray for you.

We cannot rest until our shadows also heal. 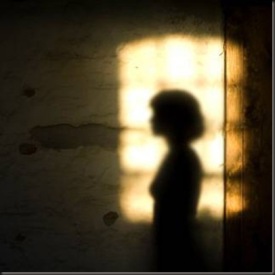 Can a departed loved one appear to someone left behind in a vision?

Dreams are common among those grieving for a lost loved one.  We have dreams while we sleep.

But is a vision of them possible, in which they appear for a moment in time to comfort the grieving one?

A vision occurs while one is awake, although there is such a thing as a night vision.

Job 4:13 In thoughts from the visions of the night, when deep sleep falleth on men,

Dan 7:7 After this I saw in the night visions, and behold a fourth beast, dreadful and terrible, and strong exceedingly; and it had great iron teeth: it devoured and brake in pieces, and stamped the residue with the feet of it: and it [was] diverse from all the beasts that [were] before it; and it had ten horns.

Dan 7:13 I saw in the night visions, and, behold, [one] like the Son of man came with the clouds of heaven, and came to the Ancient of days, and they brought him near before him…

I am not aware of anything in the bible where a departed loved one would return to visit someone with a message or bring comfort.

Mankind was visited by spirits, such as angels.

There was one account after the resurrection, that the deceased saints rose from the dead and walked around the town.  I am not sure how long this lasted.

Mat 27:52 And the graves were opened; and many bodies of the saints which slept arose,

Mat 27:53 And came out of the graves after his resurrection, and went into the holy city, and appeared unto many.

Modern day psychics and mediums “call upon the dead” which I consider just bringing up demonic counterfeits of the deceased.

But can real loved ones, as spirits, return to give a final message to one still alive in this world?

1.  I recently experienced a friends’ death back around Thanksgiving time (November, 2009).  Her 25 year old cerebral palsy disabled son just told me (February, 2010) that he had been crying for his mother, and asking God to help him, because he missed his mother.

At some point, the room became dark, and his mother appeared in glorious apparel.  She then “read a letter” to him to comfort him, and tell him that she had to die, and leave him behind, so that he would learn to do things on his own.

She also advised him to return to a certain church campground where he had been before, where yearly revivals took place.  He said when the vision was finished, he felt a tremendous peace.

2.  When I was younger, and still living with my parents,  my grandmother died.   My mother had fallen asleep in the living room on the sofa.  She awoke to see a figure in the hallway, dressed in a white nightgown.  She ignored it because she thought it was me, up for some reason.

The figure went over to one of the pictures in the hallway and pointed to it.  It then walked off.

She fell back asleep, until awakened by a phone call from my grandfather.  My grandmother had gotten up in the middle of the night, fallen, and died.

When my mother went home to the funeral, she found money behind the picture frame in my grandmother’s hallway, just as the dream/vision indicated.  My parents were able to buy a new car that they needed with the money.

Traditional thinking over the centuries has allowed room for certain rare experiences, since there is some biblical basis for them:

1.  Jesus can  appear to us (good), since Jesus appeared to his followers after the resurrection

3.  an angel can appear to us (good), since angels have been recorded many times bringing messages to humans.-

So, now, with the permission of God, can a loved one appear to us?

What do you think?

I do not propose a conclusive answer.  I just present this for further thought.

Here are some links about this for further reading:

Life is full of disappointments.

Many times we work hard for something, and we do not get it.

We spend years getting the experience, building up references, and doing a good job. We go back to school, to increase our qualifications and credentials. Then we apply for a better job, and we are rejected. We watch others who appear to be less qualified take what we were hoping for. Why?

We put much effort into our marriage or family relationships. Then our spouse leaves us for someone else, and our children would rather be with their friends, than with us. Why?

We work to maintain our property and home. One day, we put it up for sale. We have no buyers, but the guy next door, with the sloppy yard, and less maintained home, sells his home for a big profit. Why him, and not us?

One day, I was walking along, reflecting on how much I had been passed over for blessings in my life.

I felt sad, like I had missed out on a lot. There were many, many things denied to me, that I worked so hard for. I had gotten left behind too many times.

I asked God, why am I always being passed over for everything?

A still small voice boomed back:

I got the point.

When man passes over us, it is harm to us.

When God passes over us, we are protected and blessed.

Recall the Israelites in Egypt, on the night before they left.

They had to stay inside, and do special things, and not go outside.

Yet, they were the ones saved from the Angel of Death.

So, God will also allow us to be “passed over” for our protection, even when it looks like it is man doing it.

When an opportunity seems missed, it might be that we are being saved from an “Egyptian bondage” of our own.