How long does it take to write a blog post? After writing about a thousand. I don’t know. Sometimes the thoughts just kinda ripen with age. Other times they pop out of the microwave. This post is one that has been ripening with age. I’m not even sure what to write….

A few weeks back, a friend named Mike came in my tiny janitor’s office and began sharing about God’s love. It was one of several times our paths have intersected and we have talked about God’s love. I appreciate his passion. It’s not difficult for you that know Mike to figure out who I am talking about, when you put the word Mike and passion together. They fit.

Keep love in the forefront of your mind, but for a minute ask yourself the question: “Why love?” Consider from the beginning of time and before there was mankind. God was God and He likely did a pretty good job of being God. What was He thinking when he created you and me? For what purpose was the idea of mankind birthed?

The answer comes to me in a struggle. I have become aware that I do not know how to adequately express my appreciation for who and what God is. I believe my praise of God is inadequate. I want to tell God thank you for all His creations, but it doesn’t seem like that is enough. My inadequate expression of praise for the creator brought me back to my friends passion for God’s love.

I believe in a very limited way of understanding the makeup of God, that in the beginning of time and before mankind, God must have been bursting at the seams with love. He was like a balloon totally filled with love and stretched to the max. Love was the most important part of who He was. It was the essence of His being. He was bursting with Love and so passionately wanted to share in His experience. Even the rocks would cry out, but that wasn’t enough. It was time to give birth.

It was time for God to create mankind in His image. How else would His creation be able to experience the Love He so desperately wanted to share? Do you get it? God had this incredible thing called Love that He wants you to experience! It likely was the very reason you were created.

There is nothing more important in life than Love! Think on it. Dwell on it. Don’t just flippantly click to the next blog. You for a moment have been brought to a place at the feet of God and have been offered the opportunity to experience God’s greatest gift, Love. What will you do with it?

For me, Love answers a question. I now know the missing component to my praise of the Holy Father. Love.

surf to: http://www.freshc.org for a Fresh Connection…

Zechariah describes a prophetic vision of 4 horns and 4 carpenters. Each one would overcome the other in competition. Who is the last one we are waiting for, to complete the prophecy?

Zec 1:18 Then lifted I up mine eyes, and saw, and behold four horns.

Zec 1:19 And I said unto the angel that talked with me, What [be] these? And he answered me, These [are] the horns which have scattered Judah, Israel, and Jerusalem.

Zec 1:20 And the LORD showed me four carpenters.

Zec 1:21 Then said I, What come these to do? And he spoke, saying, These [are] the horns which have scattered Judah, so that no man did lift up his head: but these are come to fray them, to cast out the horns of the Gentiles, which lifted up [their] horn over the land of Judah to scatter it.

In this prophecy, the horns represented the powers that would scatter Judah and Israel, and the carpenters would represent the next empire that would come, and defeat that power.

Horns are powers that scatter and destroy.

So each power would begin as a horn, and then fall under the next power, or horn.

The incoming power would be the carpenter that would cast out the previous horn.

So each incoming horn acts as a carpenter, a builder.

Throughout history, scholars have watched this prophecy be fulfilled, with one successive event after another. The pattern looked like this until 313 CE:

Then, it got a little crazy after that. Here is the whole history:

For the past 1000 years, there appears to be a competition between the Babylonian/ Persian horn and the Roman horn.

Was Zechariah wrong, or just incomplete? The answer is neither.

Apparently, he was generalizing about the 4 powers that would struggle over the land of Israel, until God stopped the conflicts with the last carpenter.

If one visits Jerusalem, one will see the Greek, Roman, and Persian/Babylonian (Islamic) all influence there.

But the clue is in verse 21, about the last carpenter:

…..but these are come to fray them, to cast out the horns of the Gentiles, which lifted up [their] horn over the land of Judah to scatter it.

Until there is a final casting out of all gentile horns who scatter Israel, the prophecy is not fulfilled yet.

Who would be the last carpenter to cast out all horns?

He cannot be a gentile. He must be Jewish.

It obviously cannot be one of the horns, because the last carpenter cannot be a destroyer, just a builder, and he would have re-gather Israel, not scatter it once again.

The empires mentioned above so far, are not qualified, since they have all scattered Israel.

So, Who is qualified to re-gather Israel into the land forever?

Who is qualified to conquer, cast out all scattering gentile horns, and then build something that will last forever?

Only the Lord God builds the ruined places:

Eze 36:36 Then the heathen that are left round about you shall know that I the LORD build the ruined [places, and] plant that that was desolate: I the LORD have spoken [it], and I will do [it].

Amo 9:11 In that day will I raise up the tabernacle of David that is fallen, and close up the breaches thereof; and I will raise up his ruins, and I will build it as in the days of old:

Amo 9:14 And I will bring again the captivity of my people of Israel, and they shall build the waste cities, and inhabit [them]; and they shall plant vineyards, and drink the wine thereof; they shall also make gardens, and eat the fruit of them.

Who will heaven use for this building and restoration?

Who is the Lord God’s carpenter that we are all familiar with?

Does it not tell us in scripture who will be this last builder?

Mark 6:3 Is not this the carpenter, the son of Mary?

Only Jesus can fulfill the prophecy of Zechariah and Amos. Only Jesus will be able to remove all horns of human power, and destruction, and scattering.

Only Jesus can bring unity to a hurting land, and suffering world.

Jesus is the last carpenter. 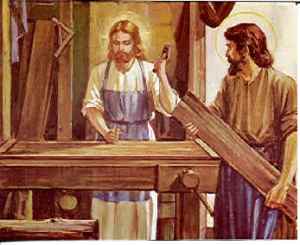 God has a way of speaking to us, if we only listen. I was driving home, and passed a small sign, posted to a tree. It said “Quality Carpenter Needed.” It immediately struck me, that there was only one carpenter I needed in my life.

Listen, and he will speak to you.

Listen, and He will direct you.

Listen, and he will show you the way.

Trust him. He will remove the horns over your life, gather you back to Himself, and rebuild you.

From my friend Faith.  What a great name!

My Thoughts:
Jeremiah 10:6
No one is like you, O Lord; you are great, and your name is mighty in power.

So…most of you know that this last week was pretty intense for my family. I received the call Friday evening from my parents telling me that my mom had been having chest pains, had been to a cardiologist, and that she would have a heart catheterization (with stints or bypass) on Monday. My entire family rushed to Missouri to be with my mom and dad. My mom was having all the symptoms of a heart attack on Sunday and was taking nitroglycerin. On Monday, the doctor told us that my mom had some anomalies (defects) and 2 clogged and calcified coronary arteries. He told us that he was pretty sure that she was going to have a triple bypass. We rallied, prayed, and hoped for the best.

An hour passed and the doctor came out with a perplexed expression on his face. He said, “She’s fine. Actually she is better than fine. Her arteries have zero plague and no calcification. Being 65, she should have some but she doesn’t. Not only is she plague free, but the abnormalities on the CAT scan just aren’t there anymore. I cannot explain it, and I called 3 other doctors in to look…God must have performed a miracle.”

My mom went home that evening and has had no chest pain or any symptoms. My mom says that all her symptoms went away shortly before they wheeled her into the procedure room and that it was fascinating to watch the doctors freaking out because they didn’t see what they thought they would. They even checked to make sure they had the right CAT scan.

I am praising God because I truly believe He healed my mom…a mighty demonstration of His power. As you pray and listen to God this week, what is God demonstrating to you?